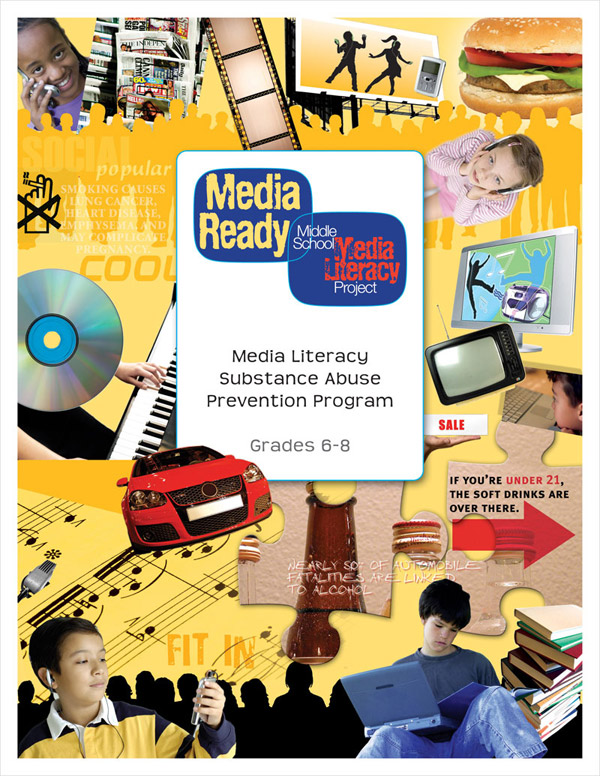 Media Ready is an engaging, new research-based media literacy program for 6th to 8th grade students, designed to delay or prevent the onset of substance use, particularly with respect to underage drinking.

Media Ready is a research-based media literacy program for 6th to 8th grade students, designed to delay or prevent the onset of substance use, particularly with respect to underage drinking.

Through ten lessons of interactive activities, hands-on practice, and group work, students discover the media world around them and develop skills to better understand the messages that are being sent to them. It is intended that they then apply these skills in everyday life to be able to stop, think, and question before accepting media messages.

It is desired that students will become more active consumers who will make informed choices.

“[Media Ready] is effective in reducing underage drinking because it was developed by leading child clinical and developmental psychologists who are also substance abuse prevention scientists and experienced educators…This curriculum will empower middle school students across the state to become media savvy consumers whose opinions and decisions about alcohol are less likely to be influenced by advertisements.”

The Media Ready program is an evidence-based program because:

Recent research suggests that the media is becoming an increasingly important influence in the lives of young people. A recent study published by the Henry J. Kaiser Foundation (Rideout, Roberts, & Foehr, 2005) reports that the U.S. children, 8-18 years of age, spend an average of 6 hours and 21 minutes per day engaged in media-related activities such as watching television, listening to music, or playing video games. This number is likely to increase as new developments are made in the field of media technology.

The following information outlines the pervasiveness of alcohol advertising and the use of media literacy as a substance abuse intervention.

“Research clearly indicates that, in addition to parents and peers, alcohol advertising and marketing have a significant impact on youth decisions to drink…”

Media Literacy as a Substance Use Intervention

Pro-alcohol messages are pervasive in the media. According to the Center for Alcohol Marketing and Youth (CAMY, 2006), children view between 10% and 33% more advertisements for various types of alcohol in magazines than adults. In addition, a report by the Federal Trade Commission found that, in 2004, children 2-20 years of age saw an average of 196.6 television advertisements for alcohol per year. Sadly, despite public concern over the prevalence of alcohol advertising featured during shows with primarily underage audiences, this number indicates an increase of 33% in the number of such advertisements viewed by children since 2001 (Ippolito, 2005, as found in CAMY, 2006). Children see advertisements for alcohol in nearly all forms of media, not just television.

Increasingly, concern over the amount of alcohol advertising viewed by children has prompted research examining the link between media exposure and substance use. A recent longitudinal study (Ellickson, Collins, Hambarsoomians, & McCaffrey, 2005) found that middle school students who reported greater exposure to alcohol advertising were more likely to drink alcohol in high school than those who reported less exposure. Since children spend so much of their time engaged with the media, which is laden with pro-alcohol messages, interventions targeted at equipping youth with the tools to resist the persuasive content of media messages is a necessary step in addressing the problem of underage drinking.

What is media literacy education?

Media literacy education as an approach to substance use prevention

Given the importance of media influence in the lives of young people, a relatively new but promising approach to substance abuse prevention has been examined in several studies (DeBenedittis, Loughery, McCannon, & Goldsborough, 2000; Austin & Johnson, 1997a, 1997b; Slater, Rouner, Murphy, Beauvais, Van Leuven, & Domenech-Rodriquez, 1996).  This new approach focuses primarily on the powerful role of the media as an influence on children’s use of alcohol and other drugs.

Recent findings suggest that media literacy is a promising approach to school-based substance abuse intervention.  Among the various outcomes associated with media literacy training are:

Despite such promising preliminary results, there is a shortage of theoretically driven and empirically tested curricula currently available.  The NC DMHDDSAS contracted with innovation Research and Training to create an evidence-based substance abuse prevention program for use by North Carolina middle school teachers.  The result is the Media Ready program.

The Media Ready (MR) program is designed to delay or prevent alcohol and tobacco use. The program is built upon a conceptual model of how youth interpret media messages and how these interpretations result in the decision to use or not use alcohol or tobacco products. MR has also been evaluated in a randomized controlled trial.

What is an evidence-based program and why is it important?

An evidence-based program is one that has been evaluated in one or more research studies. For example, Media Ready has been evaluated in a randomized controlled trial (RCT), the most stringent test of the effectiveness of an intervention. This means that schools were randomly assigned to receive the MR training and program (intervention group) or not (control group).   Students in both groups completed a pre-test and post-test questionnaire; however, the intervention group was taught the MR program in between questionnaire administrations and the control group was taught their usual classroom material.

Because this RCT design was used, differences between youth in the intervention versus the control groups at post-test can be said to be caused by having participated in the MR program . The use of this design is important because it can be concluded that the program is, in fact, effective, given that its implementation replicates or copies the procedures used in the original study.  This distinguishes Media Ready from other programs that make anecdotal or unscientific claims around child outcomes.

What are the goals of the Media Ready program?

What is included in the Media Ready program?

This program was designed for use with 6th through 8th grade students.

What are the findings of the Media Ready evaluation study?

The results of a randomized controlled trial designed to examine the effectiveness of the MRprogram indicate that it is changed key outcome variables .

Specifically, the findings indicate that:

Why not just tell students that underage drinking is illegal and bad for them?

Media Ready students have found the journey from being a passive to active media consumer to be intellectually stimulating.  Telling students that media messages are bad is not effective; nor is it true. Similarly, warning students of the dangers of alcohol use has not been a successful strategy on its own.

Media literacy education aims to empower students with the skills they need to draw their own conclusions about pro-substance media messages. To be sure, this is but one element in what must be a multi-faceted approach to the problem of youth substance abuse, but it is one that is designed to engage young people and spur them to action.

Is Media Ready easy to implement and teach?

Teachers involved in the evaluation study who attended the engaging and interactive one-day training program by iRT, found the program easy to learn and easy to teach.

iRT aimed to minimize teacher preparation by providing, whenever possible, all materials necessary for the activities that are included in the M R program. This program was designed to be adaptable to a variety of different types of classroom settings, teaching styles, and student skill levels.

How are the lessons organized?

Each lesson is outlined in a convenient “Lesson-At-A-Glance” format. These lesson summaries include the major goals and objectives for the lesson along with a list of materials needed to complete the classroom activities. This “Lesson-At-A-Glance” page provides an outline of the day’s activities that can be photocopied, so that teachers can use the outline while they teach and can make their own instructional notes on the page.

What is the content of the Media Ready program?

The curriculum concepts build upon themselves. The first part of the curriculum introduces students to many of the key concepts in media literacy, such as developing an understanding that all media messages have a target audience and being able to identify the target audience.  Students also learn to identify the implied messages embedded in media messages as well as learn the seven key critical thinking questions regarding media messages.  By learning and applying the key MR questions, students see the benefits of becoming active rather than passive media consumers. During the next part of the curriculum, students apply their new media deconstruction skills to the analysis and evaluation of a wide variety of ads including ads for food, cars, and beauty products.  After substantial practice in the application of these critical thinking skills , students transition to deconstructing tobacco and alcohol ads. The curriculum culminates with a media production activity , which provides students with an opportunity to express their media production skills through the creation of an alcohol or tobacco counter-ad .

How important is it to attend an educator training workshop?

Attendance at a teacher training workshop is fundamental to success in implementation of theMedia Ready program. This conclusion is based upon recent research by Hobbs and Frost (2003) who examined high school teachers implementing media literacy in their classrooms for one year.   They found that at the close of the study, some teachers were still uncomfortable analyzing advertisements as well as guiding their students through the process.

This important finding is consistent with the idea that media literacy skills are a challenging set of critical thinking skills to master, even for adults. Because of the abstract nature of persuasive messages found in advertising, it is believed that a key element of this curriculum is to slowly and cumulatively build critical thinking and media deconstruction skills in both the adults teaching the program as well as in the students who are taking it. The educator training workshop and the cumulative nature of the Media Ready program are designed to enhance the likelihood that all participants will internalize these skills.

What is the content of the educator training workshop?

The educator training workshop is designed to last eight hours and is led by the program developers and their training team, who are skilled trainers of both media literacy and the Media Ready program. After an introduction to the research on the effectiveness of media literacy training for the purpose of substance abuse prevention and the theoretical model underlying the program, trainers present each lesson in detail to trainees, providing guided discussion of the purpose of each activity, strategies for implementing each activity, and modeling of the activities.

Emphasis is placed on trainees receiving multiple opportunities for deconstructing media and for developing a deep understanding of the goals of the program manifested in the lesson activities.

Who developed this program?

The Media Ready program was developed by innovation Research & Training under a contract funded by the NC-DHHS/Federal OJJDP Enforcing Underage Drinking Laws Program.

Media Ready is the product of the collaboration of leading child, clinical and developmental psychologists who are also substance abuse prevention scientists and experienced educators.